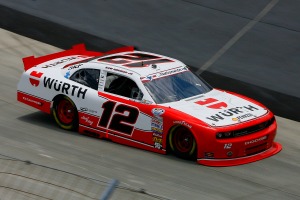 Hornish started the 200 lap race from the 10th position on the grid after he turned a lap of 23.486 seconds around the “Monster Mile” at an average speed of 153.283 miles per hour during qualifying earlier in the day.

The field took the green and ran just three laps before the first caution flag was displayed with Hornish scored in the 11th position. At lap seven the green flag signaled a return to racing and, as the field settled into a rhythm, Hornish stayed in 11th. He informed crew chief Chad Walter that car was too loose in the corners and lacked rear grip. At lap 26 the second caution flag of the day was displayed, during which time the driver of the No. 12 Dodge radioed in that over the long run the front-end of the car was good, but that the rear of the car was still too loose.

At lap 32 the green flag flew and the driver from Defiance, Ohio was scored in the ninth position due to a few of the leaders pitting during the previous caution. At lap 40 NASCAR threw a pre-determined, competition caution and it was at this point that the No. 12 Wurth Dodge came into the pits for the first time. The Penske crew made air pressure and chassis adjustments in an effort to improve the car’s handling. When the green flag restarted the action at lap 45 Hornish was scored in the 12th position.

The ensuing run would prove to be the first long green flag run of the race and Hornish quietly went to work making up positions. Over the next 30 laps the 32 year-old driver passed five cars as he made his way into the eighth spot in the running order. During this period of the race Hornish reported that the car’s handling had improved into the corner, but it was still too tight on corner exit. At lap 116 the Wurth team ordered Hornish into the pits for the first green flag stop of the day. They once again made adjustments to improve the handling of the Dodge Challenger.

Hornish rejoined the action – scored ninth in the running order – as the field was cycling through green flag pit stops. At lap 122 Hornish was caught up in the aftermath of a single car spin and sustained moderate damage to the right-front corner of the car. This brought out another caution and when the pits were opened, Hornish came in and the crew went to work patching and repairing the injured Dodge. Due to the extensive work required to fix the Dodge Challenger Hornish lost a lap to the leaders.

The action resumed at lap 129 with Hornish scored 16th. Over the next segment of the race Hornish fought his way up as high as 11th in the running order while being shown the first car one lap down, but the caution the team was hoping for did not materialize.

As the laps wound down Hornish lost a couple of positions as his tires began to wear due to his hard charge effort for the “Lucky Dog” award earlier in the run. Hornish finished out the day in the 13th position just one spot behind Penske Racing teammate, Parker Kligerman who scored a 12th –place finish in the Snap-on Dodge.

“Compared to what we had yesterday I think that it was an OK day,” said Hornish. “I thought that we were making the car better all day. We didn’t have the track position that we needed but we were moving forward on the field when I was in the wrong place at the wrong time. I had two guys getting lapped get together right in front of me and slid into my front end. It took a pretty good gash out of the right-front quarter and forced us to pit road taking away all of my track position. The guys on this Wurth Dodge Challenger did a great job getting us back out and only losing a lap to the leader. It was a bummer because our car was starting to respond to the changes that Chad (Walter, crew chief) and the guys were making. We never got ourselves on the lead lap again and had to settle for a 13th-place finish.”

With this result Sam Hornish, Jr. and the No. 12 WURTH Dodge Challenger maintain the fourth position in the NASCAR Nationwide point standings.