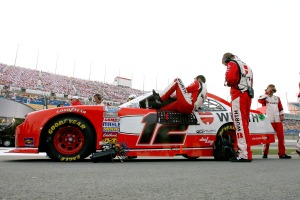 Sparta, Kentucky (June 29, 2012) – Sam Hornish, Jr., driver of the Penske Racing No. 12 Wurth Dodge Challenger in the NASCAR Nationwide Series, finished sixth in Friday night’s Feed The Children 300 at Kentucky Speedway. Hornish started and finished in the sixth position and the event marked his first-ever stock car start at the venue.

Hornish started the event from the outside of row two in the fourth spot on the grid after turning a lap of 31.732 seconds around the 1.5mile speedway at an average speed of 170.175 miles per hour, during Friday afternoon qualifying. Hornish was strong early in the race, moving into the second position during the opening lap and holding on to the position for the duration of the first green flag run. While running very competitive laps Hornish radioed in that his Wurth Dodge was too free getting into turn three and a little tight off of the corner.

At lap 25 the first caution of the night slowed the field and at lap 27 car chief Chad Walter called his driver to the pits. During the pit stop the Penske pit crew changed the two right side tires, added a can of fuel and made a slight air pressure adjustment to address the car’s handling.

When the green flag restarted the action at lap 30, Hornish was scored third in the running order. He would maintain a consistent presence in the top-five for the next 60 laps. As the sun set over the grandstands, the track cooled, which resulted in the Wurth Dodge being too free into the corners. At lap 81 Hornish brought his Dodge Challenger into the pits for the second stop of the night at which time the Penske crew changed four tires, filled the car with fuel and made a chassis adjustment to address the handling of the car.

Hornish rejoined the action in fourth place. At lap 95 Hornish radioed in that the car was still too free entering Turn 3 and he thought the team should be making bigger changes during the pit stops. Despite having a car that was too free on corner entry, Hornish kept his Dodge in the top-five. At lap 138 the Penske Dodge pitted for the third time of the night, once again making air pressure and chassis adjustments in an effort to improve the handling of the Wurth Dodge. While the field was cycling through pit stops an inopportune caution flag was displayed at lap 142, resulting in Hornish losing a lap to the leaders.

The Wurth Dodge was given the wave around, putting him back on the lead lap, prior to the restart at lap 149, while being scored seventh in the running order. Hornish would go on to make his way through the numerous lapped cars that were ahead of him on the track and, in doing so, made his way up to the sixth position where he finished the race.

“It was so-so night in a lot of ways, said Hornish. “We didn’t do what we needed to do as far as making the car better and we were just too free for most of the run. We were good a little bit earlier on in the runs but we just didn’t have what we needed at the end because I couldn’t lean on it. All-in-all our Wurth Dodge Challenger ran flawlessly. That’s a good thing. Our reliability has been great and we need to keep that up. Just need to get a little bit of speed, get a little bit smarter about the things that we do. We had a really good break there with only 25 laps in the race. Would have had an opportunity to adjust on the car and we took two tires and we were worried about losing a little bit of track position and we didn’t make a change and that hurt us all night long. I think that sometimes we just need to be smart about when it’s early in the race and when we should make changes and when it’s late in the race when we should just leave the car.  It’s just one of those things tonight. I’m just glad that we were able to get ourselves back on the lead lap and be running at the finish. That’s what we’ve got to keep doing.”

With the result Hornish and the No. 12 Wurth Dodge holds fast at fourth in the championship standings just 10 points behind third-place Ricky Stenhouse Jr.