As Seen on Fox Sports

Brad Keselowski is in an uncomfortable position right now and he knows it.

Last year, the then-28-year-old driver surprised a lot of people with a season-long show of strength and consistency that culminated in his first NASCAR Sprint Cup Series championship and the first for car owner Roger Penske in roughly four decades of trying.

This year, Keselowski may not even make the Chase for the Sprint Cup.

As noted, it is not a comfortable spot right now.

Making matters worse is the close proximity of his competitors: Kurt Busch is 12th, just two points back of Keselowski, and 13th-place Jeff Gordon, last year’s Atlanta runner-up, is just seven points in arrears of the defending champion.

So cracking the top 10 is no done deal for Keselowski. Possible, certainly, but not a slam dunk.

Keselowski does have a couple of factors in his favor: Although he got caught up in a wreck not of his own making at Bristol Motor Speedway last Saturday night, the performance of his No. 2 Ford has improved in recent weeks.

Second, Keselowski is very close to the top 10. As noted, he’s just four points behind 10th-place Logano, and he’s within 21 points of ninth-place Greg Biffle, as well. A slip by either of them would open the door for Keselowski.

And although Keselowski is winless at the 1.54-mile AMS track, he has finished strong in his two most recent races here, coming home third last year and sixth in 2011. He should be good here again this time out.

Keselowski, as is his custom, minced no words about his situation.

“Well, we aren’t in a very enviable position (in the standings), but we have two good tracks coming up for us,” he said. “We’ve tested at both Atlanta and Richmond, both with very positive results. We’re only four points outside of the top 10 – which is very doable – but we can’t have any issues.”

Indeed, issues — getting wrecked at Bristol, for example — have really hurt the No. 2 Penske Racing team this year, as did the NASCAR penalties over improper rear suspension at Texas early in the season. 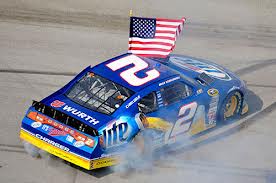 Sunday night under the lights at AMS, Keselowski will try and put all of that behind him.

“The older surfaces are where this Miller Lite Ford team really excels,” he said. “There aren’t many of them left, but we have one this weekend at Atlanta. Those surfaces fit my driving style better than any others. I haven’t won yet at Atlanta, but I think we can do that this weekend. If we can, everything will work itself out.”

And that’s certainly what Keselowski is hoping happens.